The Sassda Short Track survey had 43 respondents in September. This survey uses the same questions as those used in the monthly International Stainless Steel Forum’s (ISSF) Short Track Report. However, the ISSF survey is only of stainless steel primary producers and thus the results are not directly comparable but are used to give context.

For Sassda respondents, the results of the first question were: For ISSF Flat Products, the results were: 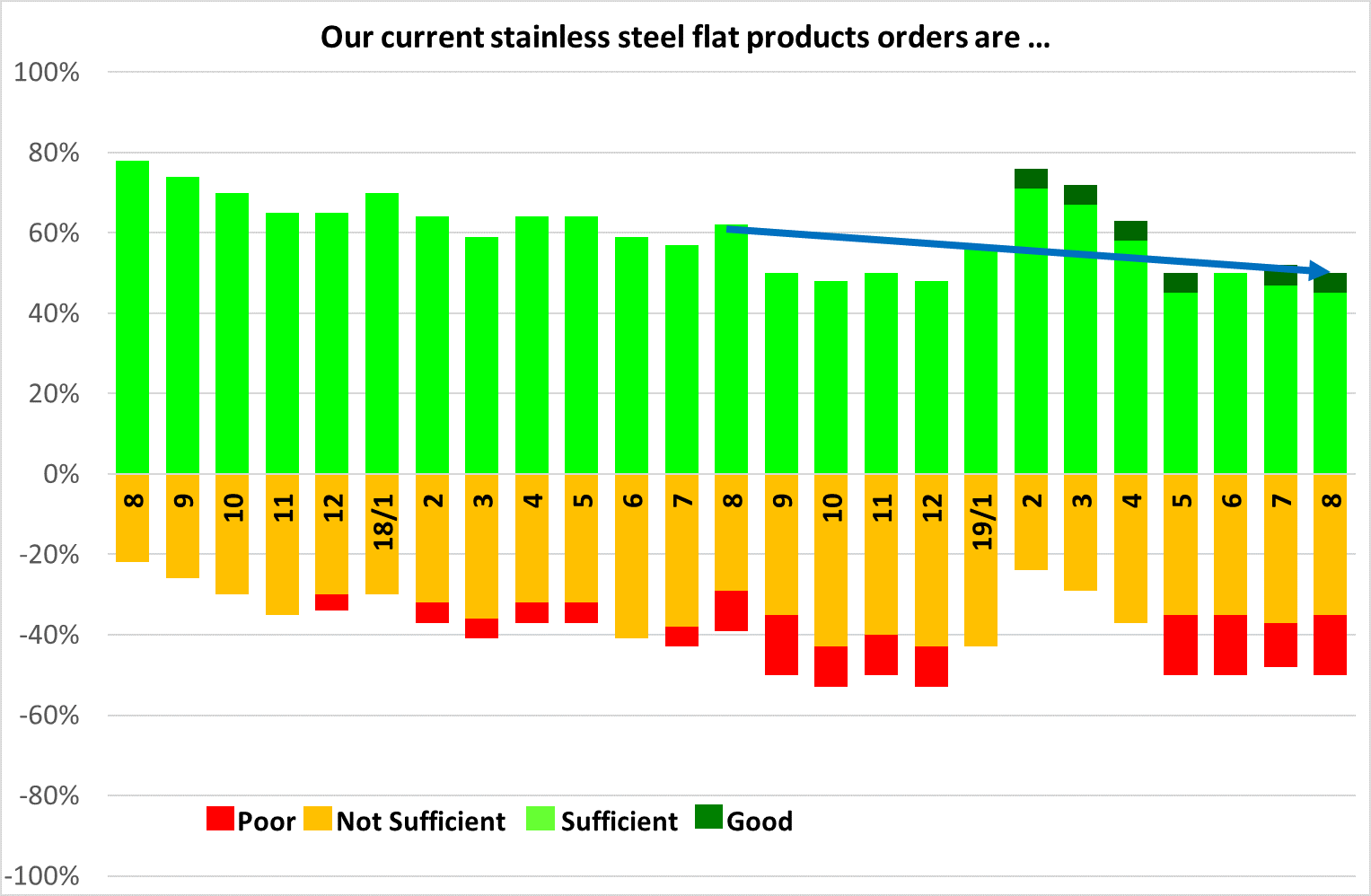 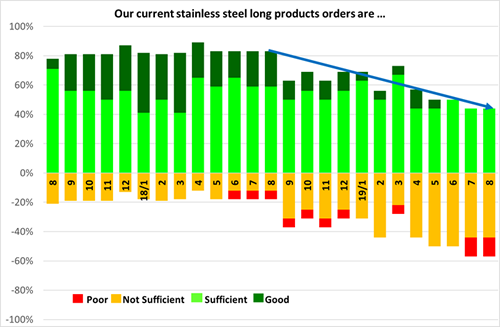 For Sassda respondents, the results of the second question were: 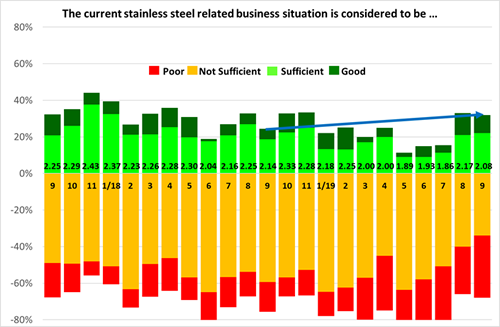 32% of Sassda respondents thought the current business situation was positive, which is worse than August (33%) and better than a year ago (25%). The weighted average is lower (2.08) compared to last month (2.17) and is worse than September last year which was (2.14).

For ISSF Flat Products, the results were: 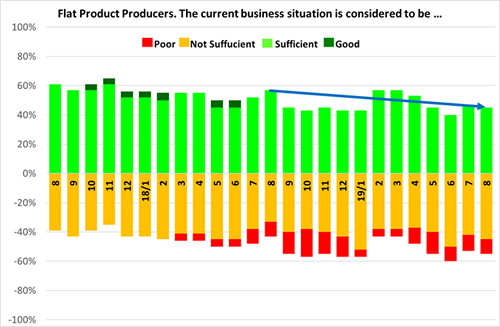 The percent of respondents who felt that the current business situation was sufficient or good stood at 45% for August 2019, which is lower than the previous month (47%) and lower than a year ago (57%). For Sassda respondents, the results of the third question were: 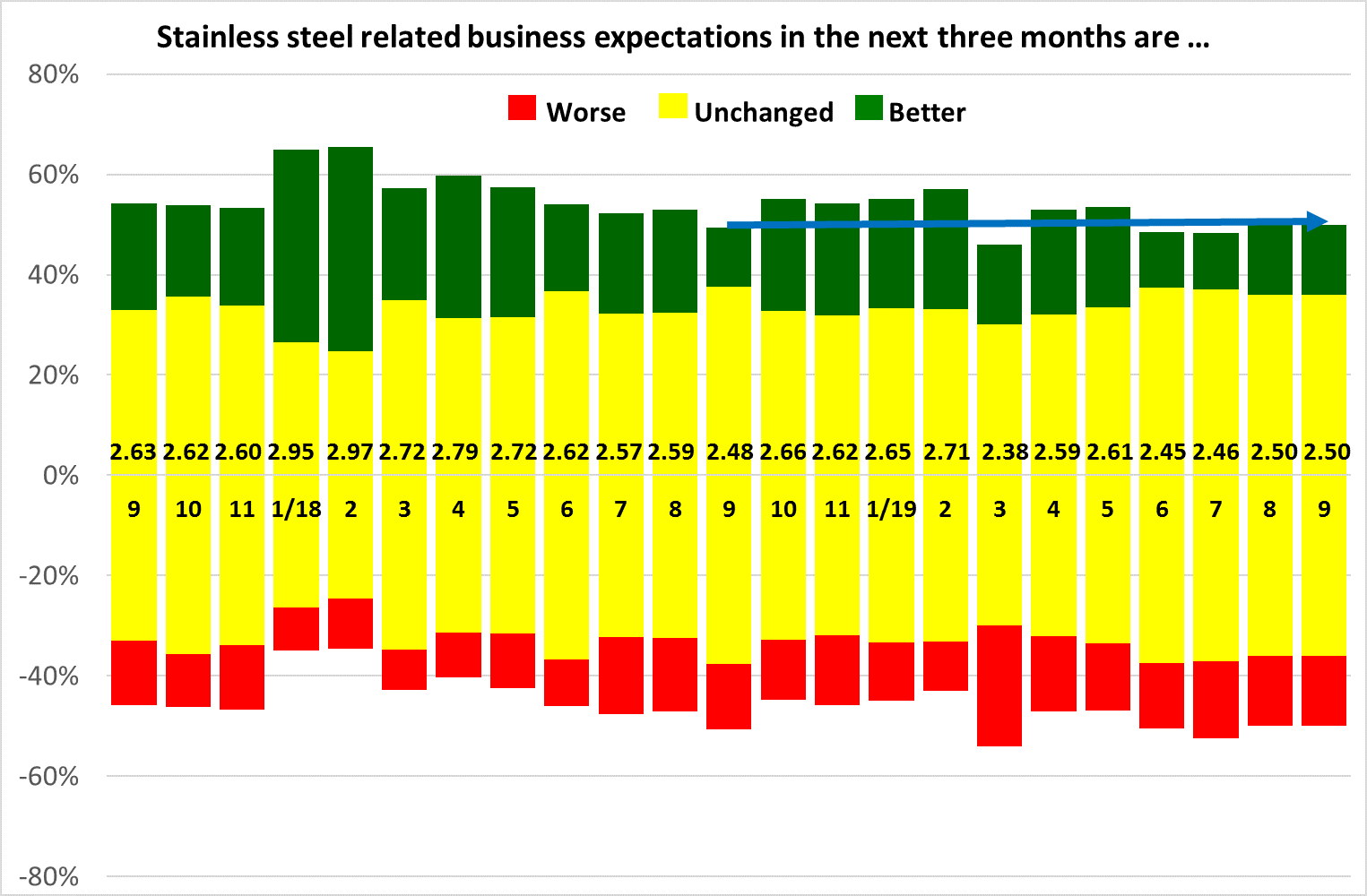 The above data can be converted to the Sassda Expectations Index, where the index is calculated as 0.5 x % unchanged + % better. Above 50 would predict expansion in the next three months. 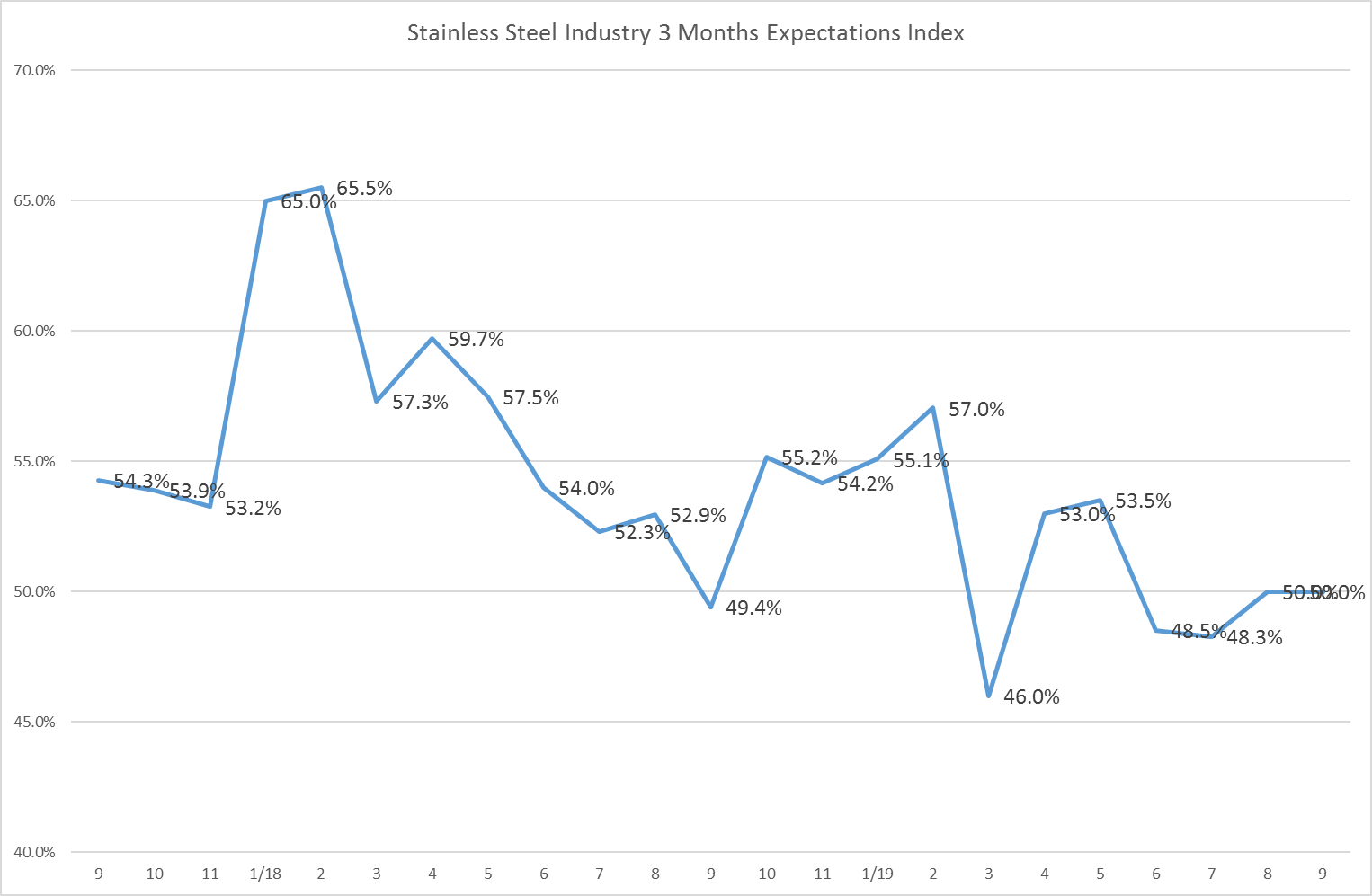 This month has shown unchanged expectations and the figure is at the neutral 50 points, indicating no change in the market.
For ISSF Flat products. The results were: 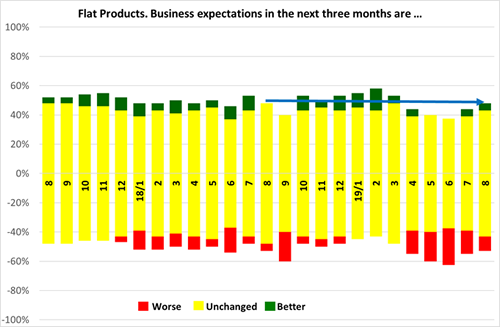 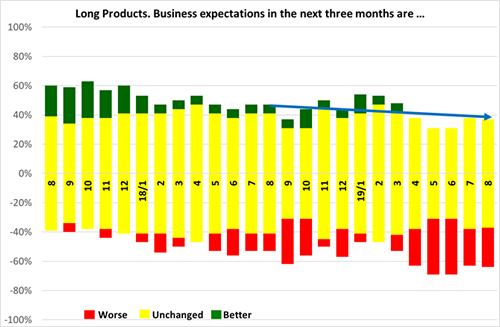 0% of ISSF long product respondents felt that business would get better in the next three months, with 27% thinking it would get worse. The weighted average of 2.12 which is worse than last month (2.15) and lower than a year ago (2.41).

The comments received from Sassda members were:

Heightened concern about global GDP growth after the release of some weak US data fuelled financial market volatility last week.

On the domestic front, incoming data prints point to persistent weakness in the domestic economy during 2019Q3.  The Absa Purchasing Managers’ Index (PMI) declined for a second consecutive month, falling deep into contractionary territory.  Additionally, new vehicle sales remained subdued in September, while credit growth moderated and electricity output suffered a second monthly decline in August. Compounding the domestic frailties is the fact that the global economy is showing even more signs of slowing.  Services PMIs followed manufacturing prints lower across most of the developed world in September, while ongoing trade disputes and uncertainty around Brexit continue to weigh on sentiment and activity.

Domestic: PMI dips further in September; trade balance swings to surplus
The seasonally adjusted Absa PMI dipped to 41.6 index points in September, down from 45.7 in August.  This was the second consecutive large fall in the PMI and brought the index more than 10 points below a recent high of 52.1 points reached in July.  The September drop was led by sharp declines in three of the five subcomponents: new sales orders, purchasing inventories, and business activity.According to the South African Revenue Service (SARS), South Africa recorded a trade surplus of R6.84bn in August, an improvement from the (revised) deficit of R3.72bn in July.  These figures include trade with Botswana, Eswatini, Lesotho and Namibia.  The improvement was due to strong export growth, combined with a more subdued uptick in imports – merchandise exports increased by 8.4% m-o-m, while imports ticked up by 1.0% m-o-m.
Despite the surplus in August, the year-to-date trade balance is still marginally in the red, with a cumulative deficit of R0.85bn recorded for the first eight months of 2019. This compares to a R4.67bn surplus over the same period in 2018.
(BER, 7th October)
For more information visit Bureau for Economic Research.