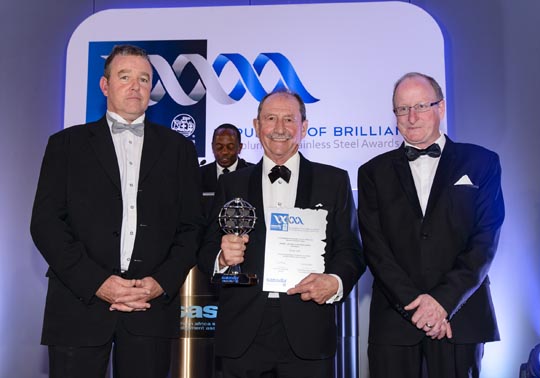 Diego Sella has been awarded the lifetime achievement award in 2016 for his contribution to the stainless steel industry over the past 27 years. His professionalism and technical and business knowledge has earned him the respect and admiration of his peers.

Diego started his career with Hall, Longmore and Co. in 1969. During his first eight years at the company he was the project engineer involved in major contracts for the Rand Water Board, the mines, Eskom, Mobil and Sapref. In 1977 he was appointed to oversee Sasol II and Sasol III.

Diego has enjoyed a long relationship with Sasol in his role as project manager responsible for major contracts involving the pressure vessels for Sasol II and Sasol III plants and the Uranium Enrichment Project at Pelindaba and the Koeberg Nuclear Plant.

After leaving Hall Longmore in 1982 to join Krugersdorp Engineering as technical director responsible for engineering he worked alongside another lifetime achievement recipient, Dave Slater. Here he handled the management of major pressure vessel contracts for the pulp and paper, chemical and petrochemical industries, the Greenside Project and Mossgas.

Diego left Krugersdorp Engineering to join Murray and Roberts in December 1991 and was then appointed as a director of Falcon Engineering from 1991-1992 where he was responsible for brewing and filtration technology. In 1992 he was appointed business manager for Consani Engineering’s food and beverage, pulp and paper and petrochemical divisions.

From 2000 to 2012 Diego was a contracted consultant to sassda and represented sassda on various technical committees such as the South African
Institute of Welding (SAQCC); the Department of Labour (PER); the South African Bureau of Standards (for stainless steel; pressure vessels and QMS related standards); SANAS; The Association of AIA’s; NIASA and UNIDO.

Prior to his tenure at sassda, large end users had opted to go to overseas fabricators for their major projects, partially due to the fact that they were
not aware of the capabilities of local fabricators and partially because they felt secure in using international accredited fabricators.

Diego started by accrediting fabrication members of sassda and in doing so brought them in line with their international competitors. Having done this he introduced them to large end users and fought for them to be included on supplier’s lists. An example is when he got 27 sassda fabricators on to the preferred suppliers list for Sasol. 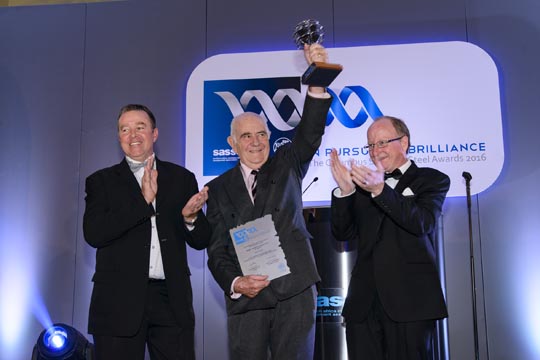 John Cluett is awarded the lifetime achievement award for the contribution he has made to the brewing industry in South Africa and for the development and use of stainless steel in various applications within the food & beverage industry.

Notable contributions to the industry by John Cluett include the following:

Studies and tests were undertaken by John in 1983 detailing the condition of brewing plants at SAB and investigating all incidents of damage to the plant and putting corrective measures in place. John’s research resulted in the decision by SAB and SABMiller to purchase only stainless steel vessels to the approved standards after 1987.

“THE INSTITUTE & GUILD OF BREWING” PUBLICATION

In 2000, John led the team (with members from sassda and Columbus Stainless) that investigated aspects of the cleanability, both from a soil/ biofilm and microbial point of view, of stainless steel.

This work included the stainless steel audit of an entire brewery as well as the building of a 700 L research vessel and culminated in John being awarded an MSc from RAU.

In 2003 under the auspices of the The lnstitute & Guild of Brewing this work was used to produce and publish a training book on “The Principles of
Hygiene in the Brewing Industry. This book was prepared by John Cluett, Dave Rowlands, Dumisani Khanyile and Gavin Hulse and is now part of the SAB Institute of Brewing Solutions and continues to offer a learning solution to many readers around the world.

“John Cluett is the Mr Stainless Steel of SAB and continues to consult for them on stainless steel matters,” says sassda executive director John Tarboton. “His passion for brewing and stainless steel is widely recognised.”